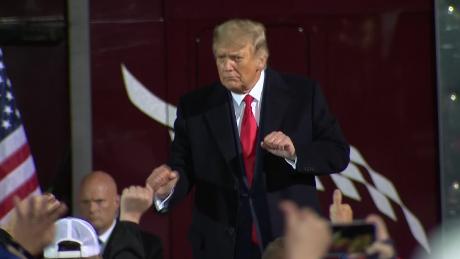 He is in a high-risk group simply by virtue of his age -- he is 74 -- and his weight. Trump is clinically obese, and obesity is a risk factor for a more severe form of the illness.
According to the US Centers for Disease Control and Prevention, people in the 65-74 age range face a five times greater risk of hospitalization and a 90 times greater risk of death from Covid-19 compared to young adults between the ages of 18-29.
Based on his physical in April, CNN reported in June that President Trump weighed 244 pounds and is 6 feet 3 inches tall. That gives him a body mass index of 30.5, making him technically, if mildly, obese. Obesity triples the risk of hospitalization from Covid-19, according to the CDC.
Trump is also a male, and men are more likely to die or suffer severe illness from coronavirus than women, the leading health agency reported.
But it's not known if Trump has other medical conditions that could put him into a high-risk group.
According to his latest physical, his blood pressure is only slightly elevated. There is no evidence he has cancer, kidney disease, diabetes or other conditions known to put people at higher risk.
The President's physician, Dr. Sean Conley said his last physical was conducted in April, and "there were no findings of significance or changes to report."
But after Trump's physical in 2018, Trump's then-physician Dr. Ronny Jackson also revealed that Trump underwent a coronary calcium CT scan as part of his routine physical exam. His score was 133, and anything over 100 indicates plaque is present and that the patient has heart disease. According to Trump's official medical records, in 2009 his coronary calcium score was 34 and in 2013, it was 98.
The score of 133 revealed there had been a steady build-up of plaque in Trump's blood vessels, indicating moderate heart disease. Also concerning were Trump's total cholesterol levels and his LDL ("bad" cholesterol). Both had increased significantly compared to tests in 2017 and those in 2018, and that was despite Trump being on a statin drug known as Crestor or Rosuvastatin.
However, not everything about Trump's health is known.
Trump made an unannounced visit to Walter Reed National Military Medical Center on November 16, 2019, spending a little more than two hours undergoing health exams as part of his physical, a trip that was notably secretive, though.
In the memo about Trump's physical released in June, the White House physician said Trump underwent additional tests at the White House after the initial visit to Walter Reed.

At 50, first lady Melania Trump is not in the highest risk age category for more severe symptoms of Covid-19, but as people get older, the risk of becoming severely ill increases, according to the CDC. People aged 50 to 64 have a three times higher risk of being hospitalized with coronavirus and 30 times the risk of death compared to people 18 to 29.
comments powered by Disqus